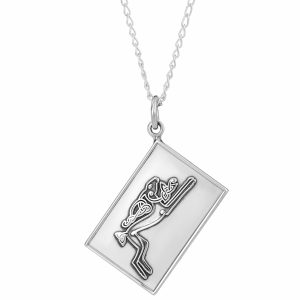 This limited edition charm is now SOLD OUT.

Please do not try to order.

The Celts of Ireland called this magical charm ‘Hare-in-the-Moon’. They believed it contained the Cosmic essence of the Celtic Circle of Life, signifying the rebirth of its owner and the beginning of a new life and new hope. The Hare was a magical solar spirit and favourite animal of the Celtic moon goddess Eostre, who give her name to the Easter festival. The Easter bunny was in fact a hare.

To Celts, the wearing of the magical Hare charm symbolises true love, fertility, prosperity and abundance. Hares are the beloved pets of the fairies. Because of this, Hares were thought to have special protective powers. The wearing of the hare charm sent a warning that those who try to harm its owner could suffer dreadful consequences at the hands of the fairies. This is a great gift idea for anyone beginning a new life and who is a true romantic at heart and who believes in fairies and their protective powers.