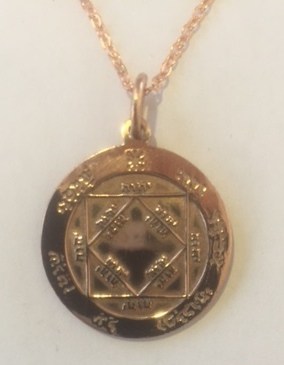 enhanced with a layer of pure 22 Carat Gold.

Supplied with a FREE matching chain worth $19.95 in a quality presentation box.

Size 25 mm across, approximately the size of a British 10p piece.

This powerful ancient talisman was designed over 3,000 years ago by King Solomon, with the aid of the Archangel Haniel. King Solomon designed it to request the assistance of the Angels named on the talisman to befriend and give direct Angelic assistance to help its owner become financially independent and prosperous. Ownership of this powerful ancient talisman is known to attract highly positive and noticeable Angelic blessings, and direct Angelic assistance and guidance to help its owner experience a prosperous and financially stable life.

Our Master Adept creates and empowers this powerful ancient talisman in full adherence to the celestial formulae and holy rituals originally disclosed to King Solomon by the Angel Haniel and outlined in the famous Clavicula Salomonis manuscripts.

Your talisman is supplied fully empowered and activated. There is nothing whatsoever for you to do on receipt of your talisman. Please Note: there is no need to even wear your talisman. Simply owning it will instantly attract the talismans associated life-enhancing Angelic benefits and blessings into your life.

This incredible successful Money and Wealth Attraction ancient talismanic pendant was originally designed in the age of miracles over 3000 years ago, by the biblical King Solomon with the aid of the Archangel Haniel. Its holy script is written in the celestial Angelic language of creation and calls on the Angels named on the talisman to befriend its owner and give direct Angelic assistance to help them become financially independent and prosperous. Ownership of King Solomon’s Money and Wealth talisman is known to attract highly positive and noticeable Angelic blessings, and direct Angelic assistance and guidance to help its owner experience a prosperous and financially stable life.

Ownership of King Solomon’s Money and Wealth talisman has been shown to swiftly banish monetary and financial worries and bless its owner with a bounty of financial good fortune. Ownership is known to attract Angelic help and blessings that create financial opportunities in its owner life path that allows them the opportunity to experience the Angelic blessings of true Financial Security and Prosperity. Many past owners of the King Solomon Money and Wealth talisman are known to have received Angelic assistance and guidance that helped them experience numerous and sometimes unusual opportunities for financial gain and prosperity.

This astonishingly successful prosperity generating talismanic pendant gains its holy power to attract the Angelic gifts of Financial Security and Prosperity to its owner, by using the celestial creative forces of King Solomon’s Third Sacred Pentacle of the Sun and his Seventh Sacred Pentacle of Jupiter, displayed on the front and back of this talismanic pendant. This highly successful Angelic talismanic pendant is considered to be one of the most powerful wealth attracting holy talismans in history. For over 3000 years it has proved itself highly successful in creating real and visible financial independence for its owners. The financial and monetary blessings its owners experience are known to continually increase and multiply year on year.