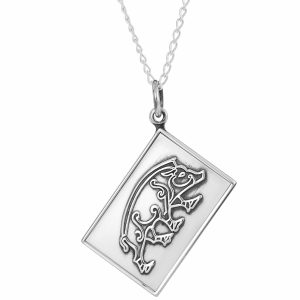 Celtic Irish Good Fortune in the palm of your hand.

Wear to generate the blessings of Virility, Prosperity, and Courage

Supplied with a FREE 20 inch solid sterling silver chain worth $21.95 in a quality presentation box.

We now only have 12 of these limited edition lucky Celtic Wishmaker magical Boar Charms left.

Wear to generate the blessings of Virility, Prosperity, and Courage.

The boar was of great spiritual significance to the Celts of Ireland due to its association with power, strength, and virility. The Celts were practitioners of Earth magic and believed that wearing a boar charm would influence Gaia, the mother of life herself, to bless them with virility, prosperity, financial security and courage in the face of adversity. In addition, the wearing of the magical Wishmaker boar charm symbolised to Celts valour and the mark of a strong warrior. This is a great gift idea for anyone in the military, law enforcement, or frontline public sector services.