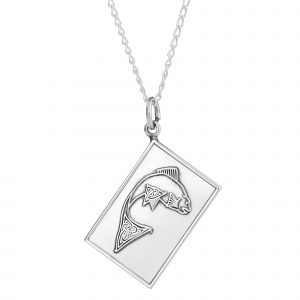 Celtic Irish Good Fortune in the palm of your hand

Wear to receive the gifts of Wisdom and Enlightenment

Supplied with a FREE 20 inch solid sterling silver chain worth $21.95 in a quality presentation box.

Wear to receive the gifts of Wisdom and Enlightenment.

The magical Celtic salmon was considered the world’s oldest animal, with the power to bestow wisdom and enlightenment on any who partook of its flesh. This ancient Celtic charm represents not the common everyday salmon, but the Celtic celestial salmon that swims in the solar sea of knowledge and wisdom and at times resides in Earthly form in the Well of Wisdom at the source of all things, which in Celtic Irish tradition is the source of the river Boyne.

The Celts associated the wearing of the magical salmon of wisdom charm with the Irish hero Cú Chulainn and his quest for true knowledge. It was said that the wearing of this magical Celtic charm helps to power up its owners’ memory potential and enable them to absorb knowledge and wisdom with little effort. The Celts believed that owners of this ancient celestial salmon charm would receive the gift of enlightenment. This is a great gift idea for students and teachers or anyone planning to change career paths.