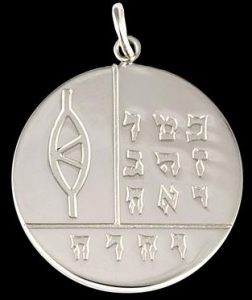 The Magical Talisman of Saturn

Supplied with a FREE matching solid sterling silver chain worth $19.95 in a quality presentation box.

Ownership of the Magical Talisman of Saturn attracts and concentrates Saturn’s spiritual energy around the life path of its owner in the form of a mystical blanket of highly positive and extremely beneficial celestial energy.

Supplied by our Master Adept fully empowered and ready to wear. There is nothing whatsoever for you to do on receipt of your talisman. Simply wear or carry on your person to instantly attract Saturn’s highly beneficial spiritual energy.

Place any order whatsoever worth $69 or more and you will receive a FREE talisman. CLICK for details.
Add to Basket

The ownership of this powerful ancient planetary talisman is known to bless its owners with the following celestial benefits and blessings: the creation of unique and unusual opportunities for financial advancement; the gift of a long, well-balanced and happy life; the awaking of, and the creation of greatly enhanced powers of concentration, and the ability to easily absorb and remember everything you encounter or study; plus the ability to safely travel in the astral world.

One of the most unique properties of this ancient talisman is its ability to help create a bridge between the physical and the spiritual worlds. Anyone wishing to practice astral travel, or planning to practice the art of making contact with souls that have passed over, or contact beings of the spiritual plain will find this talisman invaluable. Anyone planning to practice any of these should first ensure that they are wearing the Magical Talisman of Saturn as it assures its wearer easy access to the astral and spiritual worlds and most importantly it guarantees its owner total protection from all negative forces whilst involved in contacting spirit or travelling on the astral plain.

Where did the ancient Magical Talisman of Saturn originate?

According to our research it was around 2500 BC in the city of Ur, in southern Mesopotamia, that the ancient Astrologer Holy Men known to history as the Magi first discovered the secrets of the Magical Talisman of Saturn, while researching the cosmic benefits of planetary magic. The astral bodies have long been known to assert spiritual powers. The spiritual power of Saturn in particular was considered by the Magi to be highly beneficial in the creation of worldly happiness and the advancement of humankind.

By nature we are surrounded at all times by the spiritual power of the heavenly planets. However, the Magi discovered that through the power of holy Angelic words they could concentrate an infusion of Saturn’s spiritual energy into objects/talismans. With the creation of this special talisman of Saturn, the spiritual celestial energy of Saturn is diverted to the world of physical matter where it helps to create numerous beneficial changes in the life of its owner.

of the most highly potent and successful planetary and Angelic formulae

The Magi holy men referred to the square inscribed onto the talisman as the holy square of Saturn. It is recognised in historical records as the oldest of all the ancient Qabalah holy squares. In fact, it is on record as having been in use among the ancient   Sumerian holy men known as the Magi around 2500 BC, and has even been discovered on ancient temples and holy places in China and India.

Written in the sacred Cabbalistic language, the holy square of Saturn contains the numbers 1 to 9. Each vertical, horizontal and diagonal column adds up to the holy number 15. This powerful spiritual number is the mathematical equivalent of the shortest form of the sacred Tetragrammaton. When 1+5 are added together it gives Saturn’s place in the heavens as the 6th planet from the Sun and also its place in the week as Saturday, the 6th day.

The Tetragrammaton is considered the most holy celestial mathematical formula as it expresses the divine name numerically, and contains all the holy and secret names of the creator within its powerful invocation. The sacred square of Saturn which is embedded into this powerful talisman, continually calls on the creator and his Angels to bless and protect the talisman’s owner, and offer spiritual guidance in all their  endeavours. It is recorded that past owners of the Magical Talisman of Saturn enjoyed a blessed life under the guiding hand of Faith, and also experienced many benign  spiritual encounters and guidance throughout their lives.

Holy Third Eye – This powerful spiritual eye symbol reflects negative influences away from the talisman’s owner and helps to greatly enhance its owner’s natural intuition so they will easily overcome whatever life sends their way.

The written Tetragrammaton pronounced – He Vau He Yod {this reads from right to left } These highly sacred holy words use all the secret names of the creator to consecrate the talismman’s holy power to bless and benefit its owner. The written Tetragrammaton are the divine keys used to bring the talisman’s owner under the spiritual, loving and highly protective embrace of the creator and his Angels.