The Circle of Raphael are based in Great Britain. We fast dispatch world-wide using Royal Mails reliable and secure International Airmail post. Our shipping fee is only $10. We only charge one shipping fee of $10 no matter how many items you order at the same time for deliver to the same address. 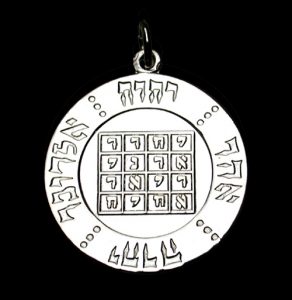 The Second Seal of Agrippa

Ownership greatly enhances and promotes the development of psychic ability.

The maser Adept of the Circle of Raphael regards this very special sacred seal talisman as highly beneficial and necessary for anyone interested in the investigation and development of their psychic ability. When carried on one’s person, it helps to greatly heighten and multiply its owner’s natural powers of intuition and also greatly enhances and promotes the development of their psychic ability.

All our talismans are supplied by our Master Adept fully empowered and activated. There is nothing whatsoever for you to do on receipt of your talisman. There is no need to even wear your talisman. Simply owning it will instantly attract the talismans associated life-enhancing Angelic benefits and blessings into your life.

Please Note: Prices shown in our talisman booklet supplied with orders are slightly lower than those shown on this website. This is because the booklet was printed before the recent massive global price increase in the cost of gold and silver.

The master Adept of the Circle of Raphael regards this very special sacred seal talisman as highly beneficial and necessary for anyone interested in the investigation and development of their psychic ability. When carried on one’s person, it helps to greatly heighten and multiply its owner’s natural powers of intuition and also greatly enhances and promotes the development of their psychic ability.

This unique sacred seal talisman is one of the most highly prized and successful talismans designed and created by the famous medieval Mystic and Visionary Agrippa {Cornelius Agrippa von Nettesheim 1486 – 1535}.  Agrippa is known to have gained his vast knowledge of the workings of the esoteric laws of nature and the attraction of Angelic blessings through direct access to copies of arcane manuscripts once belonging to the great biblical King Solomon.

Placed under the pillow before sleep it assures its owner of prophetic dreams. Agrippa himself referred to this talisman as the ‘key to all knowledge’, as it is held to give its owner subconscious access to the Akashic records which are said to store all the knowledge of the universe. past and future. We highly recommend this ancient seal talisman for anyone wishing to greatly enhance and quadruple both their psychic ability and their natural power of intuition. Its past owners included famous Mystics such as Nostradamus, Dr Dee & Eliphas Levi. Intuition is our most valuable asset and anyone using it to the full will reap rewards that will seem to the uninitiated to be nothing less than miraculous. Our Adept highly recommends the Second Seal of Agrippa for anyone in need of an edge in the game of life. Due to its ability to greatly heighten ones natural intuition and psychic powers, its owners are said to exert a mysterious influence over others.

Traditionally, the First and Second sacred seals of Agrippa are carried in conjunction with one another. They can be used separately if so desired. However carried together they treble the beneficial Angelic power of each other as well as any other talismans or amulets you may own particularly other Circle of Raphael talismans.

Owners of our talismans can only ever experience highly positive blessings and benefits through their ownership of one or more of our life enhancing angelic talismans.

The master Adept of the Circle of Raphael only ever works through the celestial light and only creates pure and holy Angelic talismans. It is totally impossible for any of our talismans to act in any negative way.

Angels were created to help humankind, so by wearing or carrying any of our Angelic talismans you are directly helping the Angels to fulfil their purpose. By doing so you bring pleasure and joy to the Angels named on each talisman. In return each angel will then happily bestow their friendship, blessings and gifts on the talisman’s owner.