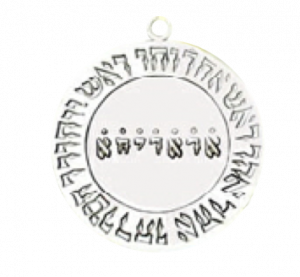 The First Seal of Agrippa

chain worth $19.95 in a quality presentation box.

Embedded into the silver metal of the First Seal talisman is Agrippa’s highly secret    celestial formula of holy Angels names and sacred Angelic words of power. Our master Adept highly recommends the First Seal of Agrippa for anyone wishing to prosper and leave their mark in life.

Supplied by our Master Adept fully empowered and ready to wear. There is nothing whatsoever for you to do on receipt of your talisman. Simply wear or carry on your person to instantly attract the talismans associated life enhancing Angelic good fortune and blessings.

Place any order whatsoever worth $69 or more and you will receive a FREE talisman. CLICK for details.
Add to Basket

This unique sacred seal talisman incorporates the life enhancing beneficial Angelic influences and properties associated with all the talismans designed and created by the famous medieval Mystic and Visionary Agrippa {Cornelius Agrippa von Nettesheim 1486 – 1535}. Agrippa is known to have gained his vast knowledge of the workings of the esoteric laws of nature and the attraction of Angelic blessings through direct access to copies of arcane manuscripts once belonging to the great biblical King Solomon.

Embedded into the silver metal of the First Seal talisman is Agrippa’s highly secret celestial formula of holy Angels names and sacred Angelic words of power. Traditionally this sacred seal talisman has been revered by Adepts of esoteric circles including our own master Adept. The First Seal of Agrippa talisman is known to attract the Angelic power to create true success and help attract financial and material prosperity to its owners, no matter what their situation, ambitions or desires. This sacred seal talisman was once available only to members of esoteric orders, its legendary owners included W. B. Yeats, Count Saint-Germain, Mme Blavatsky, Casanova and Michelangelo.

Our master Adept highly recommends the First Seal of Agrippa for anyone wishing to prosper and leave their mark in life. It is, without doubt, an incredible, highly beneficial and very necessary Angelic tool. Its possession is known to help guide its owner along life’s magical path by giving them access to a host of unique life changing opportunities they would not otherwise have experienced. All its past owners have tasted the good life and all have either left their mark on history or known the thrill of fame and worldly success, or both.

Traditionally, the First and Second sacred seals of Agrippa are carried in conjunction with one another. They can be used separately if so desired. However carried together they treble the beneficial Angelic power of each other as well as any other talismans or amulets you may own particularly other Circle of Raphael talismans.